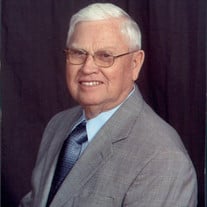 Robert Hunter Brumley, 95, of Bald Knob, went home to be with the Lord on Monday, July 26, 2021. Bro. Brumley or Bro. Robert, as he was affectionately known by all, was born June 18, 1926 in Oil Trough a son of the late Usher and Mary Martha (Smith) Brumley. As a child, he lived in several communities including Judsonia, Plainview and Osceola. He moved to the “23” Community in 1941 and with the onset of WW II, in 1945, he joined the United States Army and served for a year in the Signal Corp. In February 1946, he married Lillian Olivia Gordon and together they began a family. At the age of 30, he answered the Lord’s call to preach while he, Olivia, Lyndell and Roberta were living in Colonia, Michigan. In 1961, he moved his family back to Arkansas and he went on to pastor area churches including Honey Hill Christian Union Church and Apple Hill. He accepted the position of pastor at New Bethel General Baptist Church in the “23” Community in 1964 and he remained there for nearly 25 years. Bro. Robert served on the board of the Bald Knob North Water Association for a number of years and also as the orginations President. He also served on the General Baptist Board and the Arkansas Home Mission Society. After leaving New Bethel, he went on to pastor the Concord General Baptist Church for several years before retiring. Bro. Robert was a devout servant of the Lord and was an extremely hard worker, raising cattle and working his small farm. A gentleman always with a smile, gracious and striving to do what the Lord would have him do; that was Bro. Robert Brumley! He is survived by his son, Lyndell Brumley and wife Barbara; son-in-law, Roger Bufford; 9 grandchildren, 18 great-grandchildren and 3 great-great-grandchildren. He was preceded in death by his devoted wife, Olivia Brumley; his loving daughter, Roberta Bufford; 3 sisters, Vinnie Guthrie, Emma Jewel Guthrie and Bertha Chumley; 2 brothers, Dean and Ray Brumley. Visitation will be held on Wednesday from 6:00 – 8:00 p.m. at Powell Funeral Home. Funeral services will be conducted on Thursday, July 29, 2021 at 10:00 a.m. at the New Bethel General Baptist Church with Bro. Terry Mote and Bro. Caleb Decker officiating. Interment will follow in the Prince Cemetery. In lieu of flowers, memorials can be directed to the New Bethel General Baptist Church. Arrangements are entrusted to Powell Funeral Home, Bald Knob – Judsonia. www.powellfuneralhome.net.

Robert Hunter Brumley, 95, of Bald Knob, went home to be with the Lord on Monday, July 26, 2021. Bro. Brumley or Bro. Robert, as he was affectionately known by all, was born June 18, 1926 in Oil Trough a son of the late Usher and Mary Martha... View Obituary & Service Information

The family of Robert Hunter Brumley created this Life Tributes page to make it easy to share your memories.

Robert Hunter Brumley, 95, of Bald Knob, went home to be with...

Send flowers to the Brumley family.