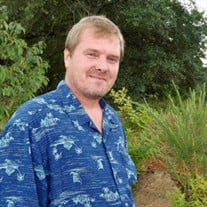 Sean Nixon, 49, passed peacefully from this life into Heaven on Friday, January 14. He was a 1991 graduate of White County Central High School where he made many friends. He was preceded in death by his parents, Billy and Novella Nixon of Providence, and three nephews, Evan Nixon, Drennon Nixon and Will Zeabart. He is survived by his children, Brooke Hambrick (Colton) of Searcy and Ethan Nixon of Bald Knob; his siblings Mark Nixon (Sue) of North Carolina, Tim Nixon of Judsonia, Lori White (Mitch) of Conway, and Cory (Jayme) Nixon of Bradford; and many aunts, uncles, cousins, nieces and nephews. Sean had a heart condition that required a pacemaker while he was just a teenager. It limited him in some ways, but also helped strengthen the special bond he had with his mother, Novella. He inherited her love of buying and selling, and they spent several happy years working together. Of course, he also had a natural ability to work on cars. Sean kept his own vehicles in good repair, and always found time to help a friend in need. Speaking of friends, they will remember Sean as a storyteller. He loved a good joke – and sometimes a good prank – and had a great mind for trivia. He loved sharing what he knew, and loved making people laugh. What he loved most in the world, though, were his children. He was a proud father and wanted them to have all the magic of childhood. He held them. He got in the floor and played. Even as his health declined, he gave Ethan's truck a custom paint job and was able to help walk Brooke down the aisle. Those were proud moments, too. Despite worsening health and other struggles, his family is comforted – especially now – that Sean's heart was strong in the way that counts the most. He received the salvation of Jesus Christ as a young man, and his heart belonged to God. No struggles on earth can take a child away from the Father's hand. We have no doubt where he is now, healthy and free of his burdens, just waiting to tell us all about it. In lieu of flowers, family and friends are welcome to make gifts in Sean's honor to cover expenses and help his children honor his memory at Powell Funeral Home in Bald Knob. Memorial services will be conducted 11:00 a.m., Saturday, January 22, 2022 at the Central Baptist Church in Bald Knob and the family will receive friends starting at 10:00 a.m. Arrangements entrusted to Powell Funeral Home Bald Knob-Judsonia. www.powellfuneralhome.net

Sean Nixon, 49, passed peacefully from this life into Heaven on Friday, January 14. He was a 1991 graduate of White County Central High School where he made many friends. He was preceded in death by his parents, Billy and Novella Nixon of Providence,... View Obituary & Service Information

The family of Sean Nixon created this Life Tributes page to make it easy to share your memories.

Sean Nixon, 49, passed peacefully from this life into Heaven...

Send flowers to the Nixon family.