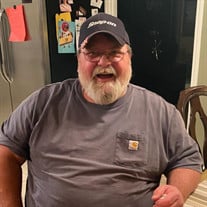 Sheldon Carroll Owens, Sr., passed from this life on March 16, 2022 at home. He was born November 5, 1966 to Carroll and Linda Owens. Sheldon graduated from Mammoth Spring High School in 1985. He began his work journey with Wal-Mart and then started a logging business. He became a father in 1987 and moved to Searcy, Arkansas in 1993 where he planted his roots to raise his family. He was talented from a young age, always taking things apart and putting them back together, which guided him through his successful careers. He started work for Fox Construction and then became self-employed with AR-MO which later turned into his ever growing business E.T.C. He was a self made heavy equipment diesel mechanic with a long list of regular customers that came to rely on his talent and expertise. He was a hard working man, was one of the best mechanics, and didn't have plans of retiring anytime soon. If you knew Sheldon, you knew he had an infectious smile and contagious laughter. He was always cracking jokes and simply having a good time. He spent most of his free time with his children whether he was shooting guns out on the farm, or going on lunch dates that usually ran into hours of cutting up and having a good time. Sheldon was a jolly ole soul and he will truly be missed by so many. In addition to his parents, he is survived by his son, Sheldon Carroll Owens, Jr. (O.J) of Judsonia; daughters, Andrea Pierpont of Higginson and Hallie Cossey of Searcy; sister, Elizabeth Rogers of Mammoth Spring; brother, Mike Owens of Searcy and Carroll Owens, Jr., of Cabot; grandsons, Joseph Cossey and Hayden Pierpont of Higginson; and granddaughters, Ryleigh Owens of Higginson, Madison Harper Pierpont of Higginson, and Ember Owens of Judsonia. He is preceded in death by his grandmothers Hazel Owens and Virtie Hall. Funeral services will be conducted on Saturday, March 19, 2022, at 2:00 p.m. in the Powell Funeral Home Chapel in Searcy with Bro. John Cates officiating. Visitation will precede the service, beginning at 12:00 p.m. Interment will follow in Mt. Pisgah Cemetery in Searcy. Arrangements are entrusted to Powell Funeral Home of Searcy. www.powellfuneralhome.net

Sheldon Carroll Owens, Sr., passed from this life on March 16, 2022 at home. He was born November 5, 1966 to Carroll and Linda Owens. Sheldon graduated from Mammoth Spring High School in 1985. He began his work journey with Wal-Mart and then... View Obituary & Service Information

The family of Sheldon Carroll Owens Sr. created this Life Tributes page to make it easy to share your memories.

Sheldon Carroll Owens, Sr., passed from this life on March 16,...

Send flowers to the Owens family.