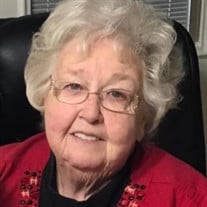 Suann LaVerne Cossey, 81 of Augusta, Arkansas passed away December 24th, 2021. She was born in Morton, Arkansas to John LaVerne and Thelma Jane Patton. Suann grew up in McCrory, Arkansas and graduated from McCrory High School in 1958. She then went to business school in Memphis, TN and later returned to McCrory and worked at Victor Metals in Newport, AR. After her marriage she became an essential partner of the successful family farming operation until her retirement in 2020. Suann married her greatest love, Charles Edward Cossey on March 7th, 1965. They were married 51 amazing years. She had one devoted daughter, Patti McGill, two beloved grandchildren, Wesley and Sydney, and one precious great granddaughter, Taylor. She was also blessed with a granddaughter-in-law, Jordann, a grandson-in-law, Samuel, and many nieces and nephews. Suann enjoyed traveling with her family to new places and visiting her family and friend in California. She loved to spend time with family at her cabin on Little Red River and she loved her Arkansas Razorbacks. Suann is survived by her daughter, grandchildren, great granddaughter, brother John Patton, sisters- in -law, June Patton, Kerry Patton, Dorothy Peterson, brother-in-law Pat Wood along with several nieces and nephews. Suann was one of four children. She is preceded in death by her parents, Thelma Jane and John LaVerne Patton, one sister LaVaughn Fakes and one brother Larry Patton, five sisters -in- law Ruby Cossey, Elizabeth Swann, Betty Champlain, Glenda Wood and Lejoy Cossey, five brothers -in- law, Jo Fakes, Darel Swann, Edgar, M.L. and Jim Cossey. Funeral services will be conducted on Thursday, December 30, 2021 at 2:00 p.m. at the Powell Funeral Home Chapel in Augusta with visitation beginning at 1:00 p.m. Interment will follow in the Augusta Memorial Park. Arrangements are entrusted to Powell Funeral Home of Woodruff County. www.powellfuneralhome.net.

Suann LaVerne Cossey, 81 of Augusta, Arkansas passed away December 24th, 2021. She was born in Morton, Arkansas to John LaVerne and Thelma Jane Patton. Suann grew up in McCrory, Arkansas and graduated from McCrory High School in 1958. She then... View Obituary & Service Information

The family of Suann LaVerne Cossey created this Life Tributes page to make it easy to share your memories.

Send flowers to the Cossey family.