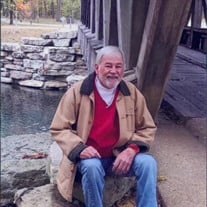 Terry Murphy, 68, of Searcy, passed away on December 21, 2021. He was born in Searcy, Arkansas on September 16, 1953 to Norma Burgin. Terry is survived by his wife, Suzanne; daughter, Mason Murphy of Searcy; step-daughter, Autumn and husband, Jeremy Fultz of Searcy; step-daughter, Whitney and her husband, David Deaderick of Collierville, TN; uncle, Charles Crotts and wife, Jessie of Searcy; uncle, Cecil Lynn Crotts of Roosevelt. He was preceded in death by his son, Marcus Murphy; mother, Norma Burgin of Searcy; aunt, Mary Hudson of Searcy and aunt, Hazel Girkin of Searcy. Terry is a lifelong resident of Searcy and graduate of Kensett High School. He continued his education at Arkansas State University where he was a member of the Lamda Chi Alpha fraternity. Terry was known as the owner of East Park Autoplex and Cool 104.7 in Searcy where his life dream was fulfilled in having his son, Marcus, as his partner until Marcus' death. After Marcus' death, it was Mason Murphy, his beautiful daughter, that gave him the heart to continue. It was Suzanne Murphy, the love of his life, that kept him going and was with him until his death. In lieu of flowers, the family request memorials to: CASA. Visitation will be Sunday, December 26, 2021 from 1:00 until 2:00 p.m. with the service to follow immediately at 2:00 p.m. at the Powell Funeral Home Chapel in Searcy. Interment will be in the Kensett Cemetery. Arrangements entrusted to Powell Funeral Home of Searcy. www.powellfuneralhome.net

Terry Murphy, 68, of Searcy, passed away on December 21, 2021. He was born in Searcy, Arkansas on September 16, 1953 to Norma Burgin. Terry is survived by his wife, Suzanne; daughter, Mason Murphy of Searcy; step-daughter, Autumn and husband,... View Obituary & Service Information

The family of Terry Ray Murphy created this Life Tributes page to make it easy to share your memories.

Send flowers to the Murphy family.