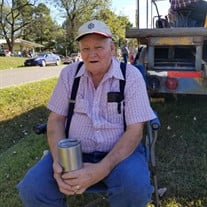 Tommy LaVaughn Tucker passed away at his home in Bryant, AR October 31, 2021. He had been battling Dementia and other health issues. Tommy was born May 10, 1948. He was preceded in death by his father, Everett Harold and mother Pauline Fraze Tucker, 3 brothers, Larry Wayne, Clifton Wade, and Everett Lynn Tucker and a sister Mary Kathryn Wallace. He is survived by his wife, Stella Louise Tucker of 53 years Three daughters, Angela (Paul) Kushner of Williamsburg, MI, Rebecca (Bo Rodriguez) Tucker, of Waukesha, WI and Shannon(Chris) Maniloff of The Colony, Tx. 4 granddaughters, Kathryn and Jessica Kushner Danielle and Morgan Maniloff. 2 grandsons, John and Cole Kushner; 1 aunt, Vivian (Frank) Mauldin, of Hillemann, AR. He also leaves behind a host of nieces, nephews, cousins and special friends including his Church family that he loved very much. Tommy enjoyed camping and fishing before this disease brought him down. He was a mechanic for John Deere in the 70’s and worked field service mechanic for forklifts when he moved to Texas in 1980. He returned home to Arkansas with his wife in 2004 to present time. Some of the other things he discovered was Cruising was great and was sorry he wasted so many years saying no because he could not fish out of the back of that boat. He also found a love of the beach in Gulf Shores, Alabama and Galveston Texas with Chris and Shannon and girls. He also shared trips and vacations with his cousin Jeanine and her partner Paul Havens. He loved entertaining and having family gatherings. Fish fries were his expertise before he became ill. He leaves many special memories and fun times with all. He leaves us with love and joy as he is received in his heavenly home with his Lord and Savior. Funeral services will be conducted on Friday, November 5, 2021 at 2:00 p.m. at the Powell Funeral Home Chapel in Augusta with Pastor Emil Woerner officiating. Visitation will be held prior to the service, beginning at 12:00 p.m. Interment will follow in the Whitehall Cemetery. Arrangements are entrusted to Powell Funeral Home of Woodruff County. www.powellfuneralhome.net.

Tommy LaVaughn Tucker passed away at his home in Bryant, AR October 31, 2021. He had been battling Dementia and other health issues. Tommy was born May 10, 1948. He was preceded in death by his father, Everett Harold and mother Pauline Fraze... View Obituary & Service Information

The family of Tommy LaVaughn Tucker created this Life Tributes page to make it easy to share your memories.

Tommy LaVaughn Tucker passed away at his home in Bryant, AR October...

Send flowers to the Tucker family.