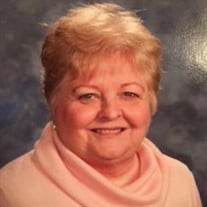 Virginia Rae (Thompson) Wright of Searcy, Arkansas went to Heaven on February 21, 2021. She was born and raised in Charleston, Missouri where she married her high school sweetheart, Charles Wright on April 10, 1954. She raised 5 sons and 1... View Obituary & Service Information

The family of Virginia Rae Wright created this Life Tributes page to make it easy to share your memories.

Send flowers to the Wright family.