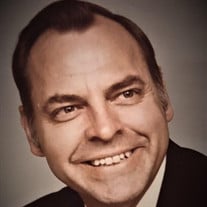 On September 24, 1928, Will Ed Warren was born on the kitchen table of a dairy farm in Hickory, Kentucky. As the youngest of five children, he was his mother's helper, but inevitably he became a working farm boy at a very young age: rolling out of bed to milk the cows at 4:00am, going to school, and running back home to milk the cows again at 4:00pm. Sunday church services were also scheduled around milking time. Even his wedding reception was paused so folks could milk their cows, then return to the celebration. Will Ed was very involved in high school and loved every minute of it. His talents included dating, showing cows in 4H, and becoming captain of the basketball team....at 5'9". He was called to ministry and, after graduating from David Lipscomb College, he began his preaching career in Detroit, Michigan. During college he married a nursing student named Micky. He loved her intellect. She loved his clean fingernails. In 1974 their family (Karen & Donna had arrived) moved to Searcy, where Will Ed and Micky joined the faculty at Harding College. He became a Bible professor and students began affectionately calling him "Will Ed." One of his lasting legacies was his infamous declaration of "TGIF Everybody!" every single Friday. Will Ed deeply loved this ministry--his students, his colleagues, mission work, and the local churches he helped heal from division and strife. In 1986 his beloved granddaughter, Taylor, was born. He couldn't wait for her to cry in church so he could stand in the back with her, beaming from ear to ear. He would drop everything and drive to Dallas just to see her. Will Ed loved this child with all of his heart. After 30 years at Harding, Will Ed retired and cared for Micky as her mind was slowly lost to Alzheimer's. They moved to Dallas to be closer to Donna, settling into a home at Christian Care Center. Micky soon required full-time Alzheimer's care. Will Ed faithfully walked to her building every morning to spend the day with her. After a few years he joined her in Memory Care. Every day he held Micky's hand, prayed with her, and loved her as her health quickly declined. They were married 64 years, until her death in 2014. It wasn't long before Will Ed became the official greeter, counselor, and jokester of the Memory Care Center. During daily devotionals he loved to sing old hymns at the top of his lungs. (He considered himself quite the vocalist.) Many times a day he could be heard exclaiming, "Well HELLOOOOOOO THERE FELLA!" Until the final week of his life he was laughing and comforting the nursing staff. It is much quieter there without him. Will Ed was a steadfast husband, father, and grandfather. Sharing the Gospel was his life's work and his love of the Lord left an imprint on the countless lives he touched in his years of ministry. Well done, good and faithful servant. Well done! Graveside service will be on Wednesday, June 30, 2021 at 10:00 a.m. at Oaklawn Memorial Gardens. Arrangements entrusted to Powell Funeral Home-Searcy.

On September 24, 1928, Will Ed Warren was born on the kitchen table of a dairy farm in Hickory, Kentucky. As the youngest of five children, he was his mother's helper, but inevitably he became a working farm boy at a very young age: rolling... View Obituary & Service Information

The family of Will Ed Warren created this Life Tributes page to make it easy to share your memories.

Send flowers to the Warren family.