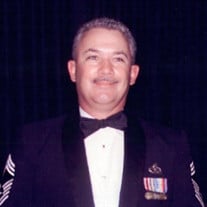 Chief Master Sergeant, Retired, William Newell Mikell, Jr., of Searcy, beloved son, husband, brother, father and grandfather, went to be with his Lord and Savior on Sunday, July 4, 2021. He was born September 18, 1954 in Tampa, Florida to William N. Mikell, Sr. and Dorothy L. McKinney. He joined the United States Air Force on July 18, 1972 where he had an illustrious career of thirty years, retiring on July 28, 2002 as the 463rd Airlift Group Superintendent at Little Rock Air Force Base. Many airman today are a success due to the mentorship, leadership, and training he provided over his career. Chief Mikell was also an avid hunter and fisherman. His love of the outdoors was well known to his family and friends and he could often be found holding a fishing pole, sitting in a deer stand, or chasing wild hogs. Those who knew him loved him. His infectious personality lit up the room and he was everyone’s friend. He will be greatly missed by all. He was preceded in death by his father, William N. Mikell, Sr. Remaining to honor and cherish his memory are his honored mother, Dorothy L. Mikell, his loving wife of thirteen years, Missy L. Mikell, three daughters, Janna Cunningham and husband Billy, Kari Jackson and Lauren Ognibene, one sister, Margaret Mikell, two brothers, Ed Mikell and his wife Teresa and Wayne Mikell and his wife Sharon, six grandchildren, two great grandchildren and a host of nieces, nephews, and beloved family and friends. Active Pallbearers are David Flebotte, Terry Brown, Hunter Redd, Zack Carter, Cody Gogus and Doss Pike. Visitation will be Monday, July 12 from 6:00 until 8:00 pm at Powell Funeral Home. Funeral services will be Tuesday, July 13 at 10:00 am at Powell Funeral Home with interment to follow at Arkansas State Veterans Cemetery in North Little Rock. Arrangements entrusted to Powell Funeral Home of Searcy. www.powellfuneralhome.net.

The family of William N. Mikell, Jr. created this Life Tributes page to make it easy to share your memories.

Send flowers to the Mikell, family.